Judges merely redirect the dysfunction of one parent as a means to achieve an equitable settlement without regard for children. Prospective lawyers to become judges practice under a code of ethics where they are only allowed to have regard their clients and not the children. A prospect practices under these rules of engagement for 20-30m years before a simple letter of appointment to the bench. They can in no way be expected to have regard for children after this indoctrination.

The code of ethics for those lawyers practicing family law needs to change before anything gets better for children.

Just know the enemy of your children are the lawyers and judges themselves.

The Children’s Rights Facebook Group now has over 18,000 Members. We’re here for Parents who need morale support, information, and more. Come check us out!

DO NOT UNDER ANY CIRCUMSTANCES VOTE FOR ANY OF THESE LEGISLATORS WHO HAD VOTED AGAINST THE FAMILY REFORM BILL:

Remember to vote in the August primary and November general election!

BRAVO and CONGRATULATIONS to this man.
He is FREE of his alimony tether.
We applaud your good fortune and wish you all the best in life and love.
You are an inspiration to all other reformers.

As we had predicted …
What a bunch of crap.
No…we NEVER will respect nor “honor” any of you who are stealing from us via lifetime alimony.
Honor and respect has to be earned.
Ya’ll are and will be pieces of shit to us…and the kids will know that forever and ever and ever.

Alienating Mother Sandra Giesbrecht on Run With Kids
Blog: June 24, 2016 by Robert Franklin, Esq, Member, National Board of Directors, National Parents Organization ~ I’ve often criticized family court judges who battle with alienating parents, sometimes for many years, until finally the alienator does something truly drastic, like abducting the children. I point out that, if the judge had acted sooner, the children would still be safe. Plus, prompt judicial action could save huge amounts of time and expense on the part of litigants as well as the court. But judges often are loath to act and the result often is a mess for everyone and abuse for the…See More

That is a page from her journal from school. She is 6 years old. It says “I am scared because I think my mom is keeping me!” It breaks my heart to read and even more to see what’s going on in the picture. My husband has 50/50 right now and is actively seeking majority because of his ex not following the order. His daughter is only 6 and knows what is going on and to be that is a tragedy.

I am a family law attorney
and I have seen first-hand the kind of unfairness that you are complaining about and I know that you are making a very legitimate point.

Every time I sit and observe for even an hour or so in family court, I come out wondering what foreign country have I wandered into. Fathers are on the bad end of some peculiar social forces and norms at this point in our culture and even understanding that it is cultural and social — and not personal — does not make it more bearable for those who are affected. I am not going to cheerlead, or defend the system. It’s wrong and it goes on and on and on.

Join forces. There is an active “Fathers’ Equal Rights” community that has only started to explore its potential for political and social influence.

One voice is a rant; many voices is public policy. All judges are ultimately accountable to the public, even those that forget that is so.

Here is contact info for local state advocates in your area, support and work with them for change.

You can begin by attending your the TFRM Rally this June 17th at your State Capitol.

There simply isn’t any other or better alternative.

Find the link to your local state rally below.

You can also go to the address printed on the meme below to see if any of our current open volunteer positions interest you. 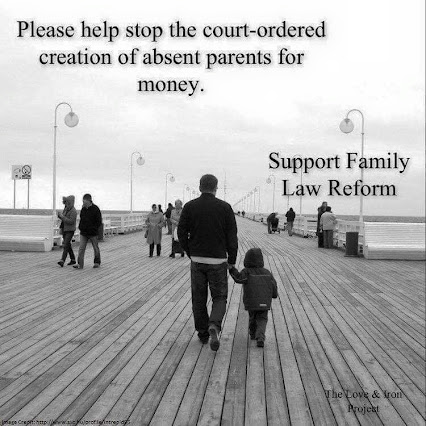 Is There Really a Fatherhood Crisis? | Kids’ Rights and Family Court
scoop.it
During the past decade, family issues such as marriage and fatherhood have rocketed to the top of the domestic-policy agenda. The past two presidential administrations, along with numerous local governments…

Goals of the Fathers' Rights Movement The fathers' rights movement arose in response to the perception that fathers were not being given equal treatment in child custody litigation. Fathers' advocacy groups typically to focus upon some or all of the following beliefs: A "traditional" division of parental roles during a marriage should not of itself mean that the father should not be considered as a custodian following divorce; Children are best served by being in the care of both parents, and thus there should be a legal presumption of joint physical custody and equal parenting time following divorce; Fathers are at a disadvantage throughout the entire custody litigation process. Fathers' rights groups assert that changes of this nature will create a family court environment where both parents are treated fairly and equally, and diminish the effects of legislation and, in some cases, of judicial bias which favors the mother. Fathers' rights groups also typically point to studies which show that the absence of a father from a child's life can lead to a wide variety of negative behavioral and educational consequences. Because We’re Not Asking You To Make A Career Out Of This Cause. We’re just asking you to show your kids and everyone else what it means to have the integrity to stand up for others and do what’s right; regardless of your personal circumstances. We’re asking you to make a powerful point by speaking with what you do; not with what you say you’ll do. Are you with us? The BEST Parent is BOTH Parents JOIN US~~> www.causes.com/AFLA JOIN US~~> www.causes.com/causes/804504-american-fathers-rights-afla View all posts by afla2016

We’re just inviting you to take a timeout into the rhythmic ambiance of our breakfast, brunch and/or coffee selections. We are happy whenever you stop by.